Typical EMG measurement system consists of one central device with more channels with electrodes which are connected with wires which makes whole system complex and restrictive during movements. Moreover, in general third reference electrode which is placed on electrically non-active tissue further away is used, which limits any smaller and more user friendly designs.

The goal of this project was to design, construct and test a single channel compact-size, wireless and surface EMG measurement system. Idea was that instead of having central device which is used for sampling and processing, each channel is independent acquisition system which can send acquired and processed data wirelessly to a device with graphical user interface. As a wireless communication channel Bluetooth Low Energy used which enabled to have a smart phone as a central device which collects stores and visualizes data. Current maximal transfer data rate achieved with BLE is 770 samples/s. In further work, attempt should be made to achieve 1ksample/s transfer rate.

Additionally, three-electrode analog amplification and filtering part was designed, constructed and tested. Final dimensions of device are approx. 4cm x 3cm x 3cm. The device attaches to the body by using three sticky gel electrodes. In Android application the measured data is visualized in two ways: in line graph where data can be observed through time and in bar graph where current muscle activation is visualized. 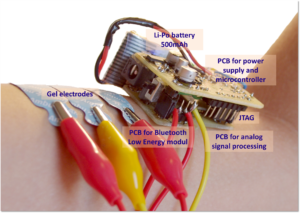 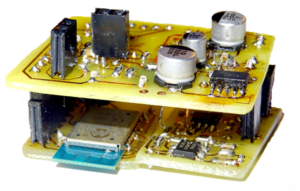 In future fatigue analysis part will be added to the Application and logging of the measured data to the SD card. Also more devices will be able to connect simultaneously. Since final idea is to use device for physiotherapy, goal is to be able to define different exercises by muscle activation levels. This way application could analyze exercise performance, count properly done ones and give feedback to the patients. 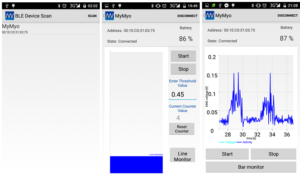 In total, the prototype of compact-size, wireless and surface EMG measurement device was constructed and tested successfully. 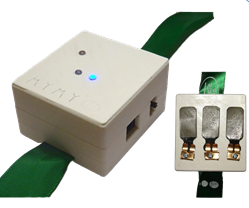 Project was presented on a CMBEBIH  (International Conference on. Medical and Biological Engineering) that was held from 15. to 18. March 2017. in Sarajevo, Bosnia and Herzegovina. A presentation of a project: CMBEBIH_presentation